Birmingham pupils to be taught about bravery of Indian troops – and then interview their descendants.

More than 400,000 Muslim soldiers fought in World War One , yet a recent survey by British Future, a think-tank dedicated to racial integration, has revealed that only 22 per cent of people know of their sacrifice.

And only a pitiful two per cent are aware of the scale of that sacrifice.

Now British Future project co-ordinator Avaes Mohammed is overseeing a scheme to educate Birmingham children about the part Muslims from India played in the Great War.

Avaes, assisted by Birmingham historian Jahan Mahmood, is giving history lessons to a Muslim group from Lozells and a group of non-Muslims from Kingstanding .

The youngsters will then interview descendants of soldiers who fought in the war.

The project is one of four across the country that makes up “An Unknown And Untold Story – The Muslim Contribution To The First World War”.

“We should not forget their contribution, because remembering it is so important to our contemporaries”

It is run by British Future and New Horizons In British Islam, with funding from the Heritage Lottery Foundation .

“Almost one-and-a-half million men from India took part in the war,” says Avaes. “That is more than all the other Empire countries put together.

“They fought on the Western Front, in the trenches, when the Germans were making great advances and they were instrumental in solidifying the British force.

“We should not forget their contribution, because remembering it is so important to our contemporaries.

“Commemoration is a force of good in the community because it brings people together.

Of that massive force, 62,060 were killed in action. They gave their lives at epic battles such as the Somme and Ypres. Hundreds were killed in a gallant, but futile, engagement at Neuve Chappelle.

More than 1,000 of them lost their lives at Gallipoli and nearly 700,000 sepoys fought in Mesopotamia.

Yet they arrived on the muddy, cold battlefields ill-prepared, clad in tropical uniforms and wholly ignorant of the mechanised conflict into which they had been plunged.

“For many,” said 36-year-old Avaes, “it would be their first interaction with the British.

“The landscape and climate were completely different. It was raining and they were in their tropical uniforms. They weren’t prepared for battle in Europe.

“He also wrote about crocodile-like weapons. He was referring to U-Boats.”

One letter to relatives painted a vivid picture of the pain and suffering: “The shells are pouring like rain in the monsoon,” wrote the sepoy.

“The corpses cover the country like sheaves of harvested corn.”

Eight Indian nationals received the highest military honour for their bravery, the Victoria Cross, but one has become the torchbearer of the campaign to remember their legacy.

Khudadad Khan, of the 129th Duke of Connaught’s Own Baluchis, was the first Indian soldier to receive the VC.

Khan, a Sepoy, single-handedly stemmed a German attack during the first battle of Ypres on October 31, 1914.

The newly arrived Baluchis were rushed to the frontline to thwart the enemy’s bid to capture the ports of Boulogne and Nieuport.

It proved a slaughter, with two companies of the Baluchis bearing the brunt of the main German attack near the village of Gheluvelt, Hollebeke.

Khudadad’s machine gun team continued to strafe the Kaiser’s men until he was the only man to survive bullets and bayonets.

“Because it was the first VC, it has become symbolic of the way the Muslims had engaged, with dedication, absolute courage and valour”

He was left for dead, but managed to crawl back to his regiment under the cover of night.

Thanks to Khudadad’s bravery, the Germans were held up long enough for reinforcements to arrive.

Despite the severity of his injuries, the hero lived to a ripe old age, dying in Mandi Bahauddin, Pakistan, in 1971.

“Because it was the first VC, it has become symbolic of the way the Muslims had engaged, with dedication, absolute courage and valour,” said Avaes.

“It was said if a man fell, you should not go back to the battlefield to pick him up. But it was quite common for Muslim soldiers to go back because that is part of the culture. They would not leave their own unburied.”

Reaction among Tommys to the Indian khaki contingent was mixed.

“They were not considered cannon fodder by white officers,” stressed Avaes. “Those officers went over-the-top with them.

“How they were treated is difficult to assess. For example, Brighton Pavilion was turned into a hospital for Indian soldiers and the conditions were very good and the men were visited by royalty.

“But the Kitchener Hospital, also in Brighton, was likened to a workhouse, with barbed wire around the perimeter. That was to stop Indians going into town. Fraternisation with white women was severely frowned on.”

Khudadad Khan, VC (20 October 1888 – 8 March 1971) born in Chakwal in what is now Pakistan, was the first Indian Army[1][2]recipient of the Victoria Cross, the highest military award for gallantry in the face of the enemy given to British and Commonwealthforces.

On 31 October 1914, at Hollebeke, Belgium, 26-year-old Khan performed an act of bravery for which he was awarded the Victoria Cross during the First World War.

A statue of Khudadad Khan is at the entrance of the Pakistan Army Museum in Rawalpindi.[3]

Born on 20 October 1888 into a Rajput family[4] in the village of Dab in Chakwal District (then a tehsil of District Jhelum) of the Punjab Province, British India (now Pakistan), Khudadad Khan was a Sepoy in the 129th Duke of Connaught’s Own Baluchis, British Indian Army (now 11th Battalion The Baloch Regiment of Pakistan Army). The battalion formed part of the Indian Corps, which was sent to France in 1914, to shore up the British forces fighting on the Western Front during the First World War.

In October 1914, the Germans launched a major offensive in northern Belgium, in order to capture the vital ports of Boulogne in France and Nieuport in Belgium. In what came to be known as the First Battle of Ypres, the newly arrived 129th Baluchis were rushed to the frontline to support the hard-pressed British troops. On 31 October, two companies of the Baluchis bore the brunt of the main German attack near the village of Gheluvelt in Hollebeke Sector. The out-numbered Baluchis fought gallantly but were overwhelmed after suffering heavy casualties. Sepoy Khudadad Khan’s machine-gun team, along with one other, kept their guns in action throughout the day; preventing the Germans from making the final breakthrough. The other gun was disabled by a shell and eventually Khudadad Khan’s own team was overrun. All the men were killed by bullets or bayonets except Khudadad Khan who, despite being badly wounded, had continued working his gun. He was left for dead by the enemy but despite his wounds he managed to crawl back to his regiment during the night. Thanks to his bravery, and that of his fellow Baluchis, the Germans were held up just long enough for Indian and British reinforcements to arrive. They strengthened the line, and prevented the German Army from reaching the vital ports. For his matchless feat of courage and gallantry, Sepoy Khudadad Khan was awarded the Victoria Cross.[5][6]

Khudadad Khan retired as a Subedar. He died in 1971 and is buried in Chak No. 25, Mandi Bahauddin. His Victoria Cross is on display at his ancestral house in Village Dab (Chakwal), Pakistan.[note 1]

His Majesty the KING-EMPEROR has been graciously pleased to approve of the grant of the Victoria Cross to the undermentioned soldier of the Indian Army for conspicuous bravery whilst serving with the Indian Army Corps, British Expeditionary Force: —

On 31st October, 1914, at Hollebeke, Belgium, the British Officer in charge of the detachment having been wounded, and the other gun put out of action by a shell, Sepoy Khudadad, though himself wounded, remained working his gun until all the other five men of the gun detachment had been killed.

He was awarded the medal on the same day as Darwan Singh Negi VC; but is regarded as the first Indian recipient, as the latter’s VC action was of later date.

The regiment was raised on 6 May 1846 at Karachi on the orders of General Sir Charles Napier, the British Governor of Sindh. Its manpower was mostly drawn from Balochis, Sindhis and Pathans of Sindh. Later, it also recruited Brahuis and Punjabi Muslims, while the recruitment area was extended to include Baluchistan, North-West Frontier Province and the Punjab. In 1856, the battalion was dispatched to Persia and fought in the Anglo-Persian War. In the post-Mutiny realignment, it was brought into line in 1861 and became the 29th Regiment of Bombay Native Infantry or the 2nd Belooch Regiment. In 1862, the regiment went to China to suppress the Taiping Rebellion. Two years later, they became the first foreign troops to be stationed in Japan, when two companies were sent to Yokohama to guard the British legation. In 1878-80, the 2nd Belooch Regiment fought in the Second Afghan War, followed by the Anglo-Egyptian War of 1882. In 1883, the Duke of Connaught was appointed their Colonel-in-Chief.[2][3][4][5]

Subsequent to the reforms brought about in the Indian Army by Lord Kitchener in 1903, all former Bombay Army units had 100 added to their numbers. Consequently, the regiment’s designation was changed to 129th Duke of Connaught’s Own Baluchis.[4] In 1912, General Sir Garrett O’Moore Creagh, VC, GCB, GCSI, Commander-in-Chief, Indian Army was appointed Colonel of the 129th DCO Baluchis. He was a former Commanding Officer of the regiment.[4] The regimental full dress uniform in 1914 included a rifle green turban and kurta (knee length tunic) piped in red, worn with red trousers and white gaiters. The red trousers were a distinctive feature of all five Baluch infantry regiments then serving in the Indian Army.[6] 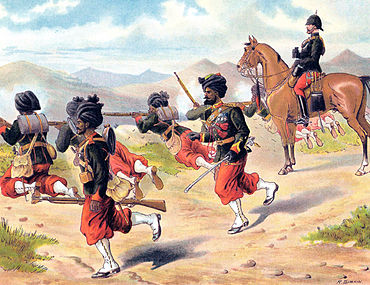 During the First World War, the 129th DCO Baluchis served on the Western Front in France and Belgium, where they became the first Indian regiment to attack the Germans . At Hollebeke, during the First Ypres, Sepoy Khudadad Khanbecame the first Indian to win the Victoria Cross; Britain’s highest decoration for valour. The regiment also fought in the Battles of Messines 1914, Armentières 1914, Festubert 1914, Givenchy 1914 and Neuve Chapelle. From France, the regiment proceeded to German East Africa and again distinguished itself in the long and difficult campaign.[1][4]The German commander, General von Lettow-Vorbeck, said of them: “… the 129th Baluchis … were without a doubt very good”.[7] The regiment suffered a staggering 3585 casualties out of the 4447 officers and men, who served with it in the First World War.[8] Out of these casualties 348 died, including 45 attached men from the 127th Baluchi Light Infantry and 6 men from the 124th Baluchis. In 1918, the regiment raised a second battalion. Both 1st & 2nd Battalions 129th Duke of Connaught’s Own Baluchis fought in the Third Afghan War of 1919, while the 2nd Battalion also served in Iraq during the Iraqi revolt against the British in 1920. The 2nd Battalion was disbanded in 1922.[1]

The 129th Duke of Connaught’s Own Baluchis near Hollebeke, Belgium, First Battle of Ypres, October 1914.

During the Second World War, 4/10th Baluch served in Italian East Africa, North Africa and Italy. The battalion’s performance in the war was once again highly commendable. It suffered a total of 1677 casualties and received numerous gallantry awards. On the Partition of India in 1947, the battalion, along with the Baluch Regiment was allocated to Pakistan Army. In the 1948 Indo-Pakistan War, the battalion captured the strategic heights of Pandu in Kashmir.[9][10] In 1956, on the merger of 8th Punjab and Bahawalpur Regiments with the Baluch Regiment, 4 Baluch was redesignated as 11 Baluch (now 11 Baloch). During the Indo-Pakistani Wars of 1965 and 1971, the battalion fought with distinction in the Lahore and Zafarwal Sectors.[1]